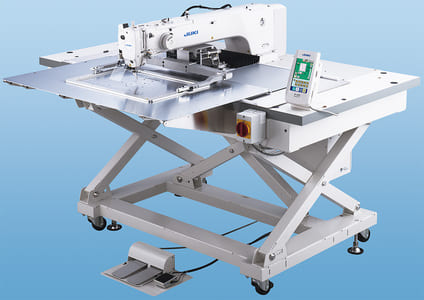 The machine not only achieves higher productivity due to instantaneous increases/decreases in sewing speed at the beginning /end of sewing and increased speed of thread trimming, but also achieves a flexible responsiveness to materials to promise enhanced seam quality due to JUKI's unique active tension and programmable intermediate presser.

Thanks to the adoption of the hook cover open/close sensor, the hook cover will never be left opened. As a result, a malfunction that the operator unintentionally touch the hook during machine running.

The automatic bobbin-thread winding and feeding device has been developed for the sewing machine as an option.With this device, the sewing machine responds to the sewing of various kinds of materials and stitch types while achieving an increased productivity.

The AMS-224EN4530R has adopted the rotary type hook. The automatic bobbin-thread winding and feeding device (AW-3) which is suited to the sewing of large articles such as car seats is optionally available. In the case of sewing large articles, etc, a large quantity of bobbin thread is consumed during sewing of one article. This means that replacement of bobbin frequently occurs. Since the AW-3 changes the bobbin automatically before the bobbin-thread runs out and bobbin-thread is wound during sewing, the operator is able to concentrate on sewing without worrying about shortage of bobbin thread. In addition, only two bobbin cases are required for sewing. As a result, burdensome control of bobbin thread tension and bobbin-changing work are no longer required, thereby contributing to increased productivity.