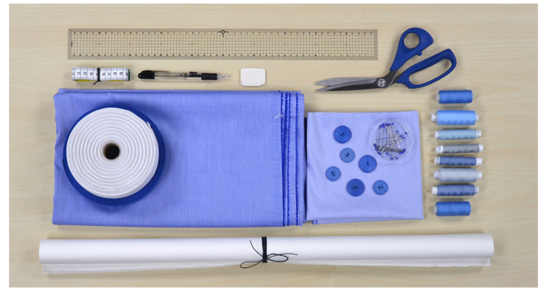 1
The work starts with preparing a form for half of a sweatshirt; in step no 4, you will divide a form into separate parts of a front, a back and a sleeve. Prepare a form for half of a T-shirt; press your T-shirt with an iron and fold it in half lengthwise; spread it down on a paper so that the material stays not tightened or not gathered; outline your T-shirt; a shape of an armhole and a front part of a neckline should be copied by densely spiking seams with pins so that there are holes in the paper that determine the shape (if you put a thick material under the paper, pins will be spiked deeper and the holes will be more visible); the width of a bottom of a T-shirt should be equal to ¼ of your hip size – if it is not, widen a bottom. 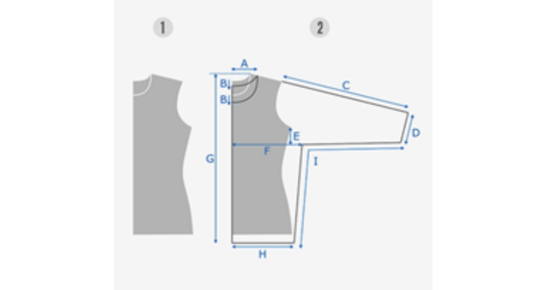 2
Convert a form for a sweatshirt – the dimensions given are 36/38, but you can modify them to your expectations and needs: - determine the width of half of a neckline; a new neckline should be wider at least 2cm that the one in a T-shirt (A=13cm) - deepen a neckline of a front and of a back so as an arc ends up at a right angle to a center line of a blouse (B=3 cm) - extend an angle of an arm to the length at which you want to make a cut on a sleeve, lengthen this line to the desired length of a sleeve; remember that you will sew a puller to it (C=52cm) - determine, at a right angle to the slant, the width of a sleeve in its bottom part; it must be wide enough to put your hand in (D=13cm) - descend by 6cm from an armhole (E) and at this height, enter the width of a sweatshirt, it should be a quarter of a circumference of a chest increased by 5-7cm (F=28cm). - determine the length of a sweatshirt measured from the highest point of a shoulder (a line between a neck and a neckline); remember that you will sew a puller to it and thus lengthen a sweatshirt (G=64cm) - determine the width of a bottom of a sweatshirt: a quarter of the hip size increased by 1-2cm (H=25cm) - draw a side and a bottom of a sleeve (I) combining widths H, F and D. Separate forms: a front (a deeper neckline) and a back (a shallower neckline): - set cuts between a sleeve and a torso – black lines (J=6.5cm / K=4cm) - cut rectangle forms out of a front – you will sew a binding here; determine the depth of a cut (L=20cm) and a width of half of a binding (M=2cm) - measure circumferences of a front (N) and a back neckline (O). 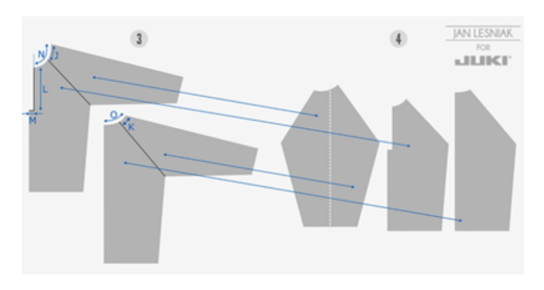 3
Cut sleeves and a torso; a sleeve of a back and a front must be glued together so that they touch with a ridge; the same with a form for a back; you will prepare a form for a front in step no 6. 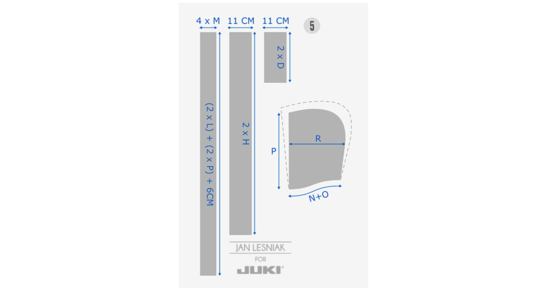 4
Prepare a form for a hood, a binding and a puller (rectangles of dimensions shown in the picture); copy a form for a hood out of your sweatshirt, just like a shape of a T-shirt, folding a hood in half; adjust a size to your expectations; the most important is that a wave at a bottom of a hood has the same length as measurements of a front and a back necklines (N+O); a height (P=37cm), a width (R=27cm); you can modify a form of a hood (a dotted line), but remember not to change a length of a wave at a bottom; sew a prototype of a hood to check a form. 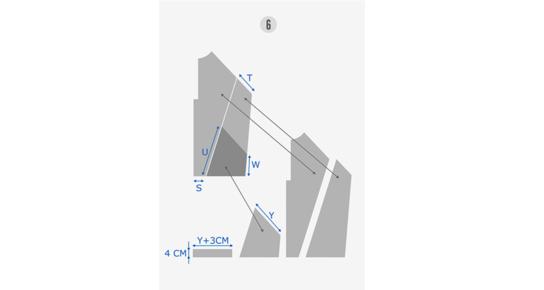 5
Make a cut at an angle on a form of a front of a sweatshirt (T=11cm / S=5cm); draw a pocket on a side part (U=25cm / W=10cm); separate a front into a middle and a side part; separately copy a form of a pocket and prepare a form of a finishing binding – a rectangle of dimensions given in the picture. 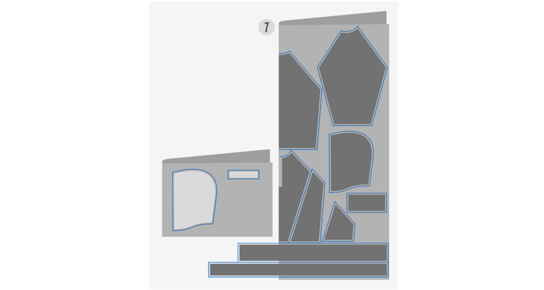 6
Make a cut at an angle on a form of a front of a sweatshirt (T=11cm / S=5cm); draw a pocket on a side part (U=25cm / W=10cm); separate a front into a middle and a side part; separately copy a form of a pocket and prepare a form of a finishing binding – a rectangle of dimensions given in the picture. 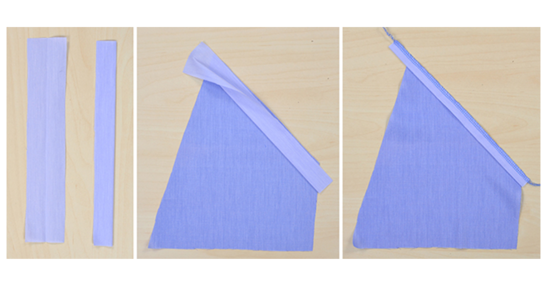 7
Start with trimming edges of a pocket; press a strip in half lengthwise with an iron; sew a binding to an edge of a pocket, overcast using overlock stitching and press with an iron. 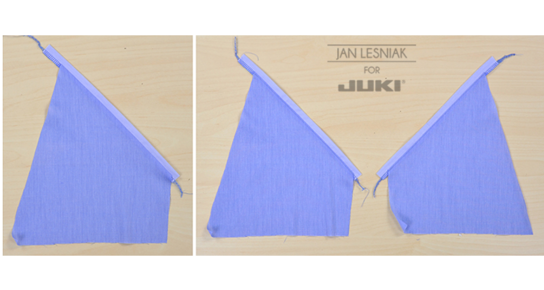 8
Make a stitching on a regular machine on a right side, just by a seam on order to sew a seam allowance underneath. 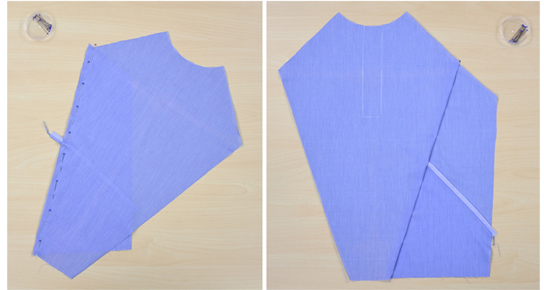 9
Put a pocket on a side panel of a front so that bottom and side edges overlap; pin a middle part of a front. 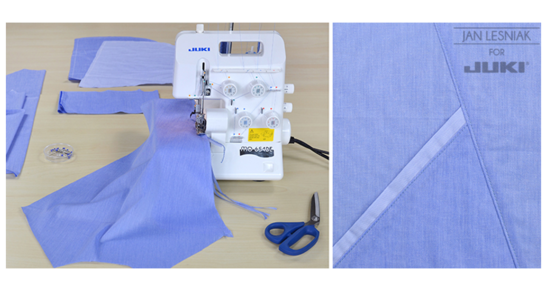 10
If you are using a fabric, sew elements on a regular machine, and after doing each seam, overcast seam allowances with an overlock machine; in case of a knitted material, use only a 4-thread overlock machine; after sewing and overcasting, press a seam with an iron and do a stitching on top – just like in a case of a pocket; similarly sew the other side panel. 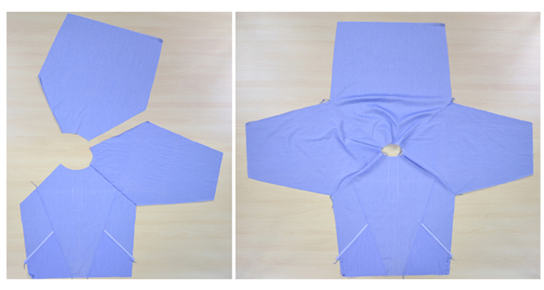 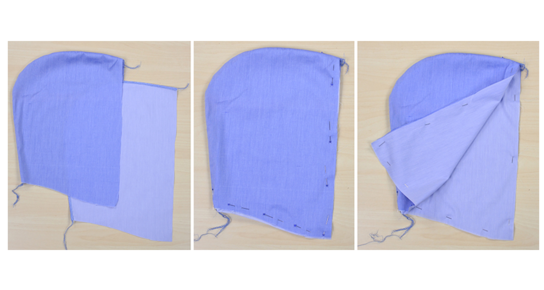 12
Sew together halves of a hood on a ridge – separately a top and an inner layer; turn up a top layer on a right side and slide an inner layer into it; fasten edges with pins. 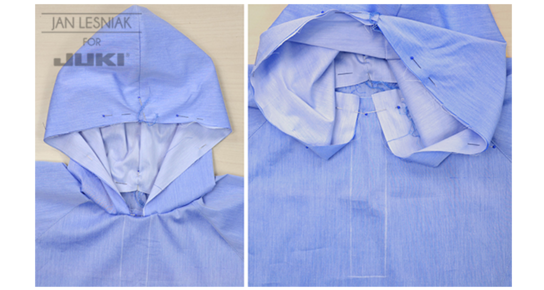 13
Pin a hood around a neckline starting from the middle of a back neckline; at a front, edge of a hood should protrude at least 1cm beyond edges of a rectangle drawn under a front neckline; Turn up a sweatshirt to a left side (inside out), slide a hood to the inside and sew up edges of a hood and a neckline; when sewing, a presser foot must be inside a neckline. 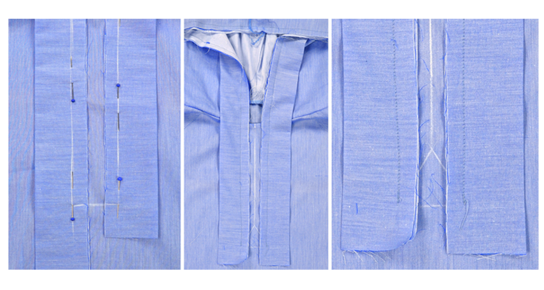 14
Now the most difficult part – a finishing binding of a neckline and of a hood; press a binding with an iron in half lengthwise; pin it in a way that a folded edge faces to the outward and unhemmed edges face to the inside of a sweatshirt; pin a binding 3cm below a drawn rectangle so that it covers its vertical edge – it should overlap on a vertical edge of a rectangle by about 1cm – see a picture; pin a binding around a hood and on the other side of a rectangle, in the same way as on the opposite side; sew a binding on a regular machine. Caution! The beginning and the end of a seam must be exactly at the same height – that will decide a shape of a bottom of a binding which must be straight. 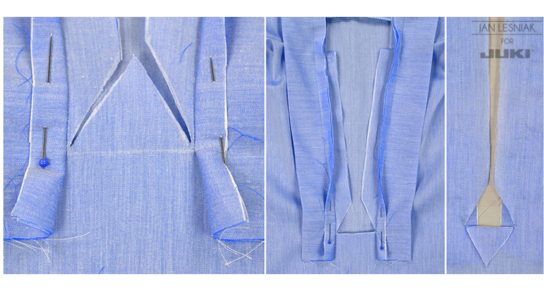 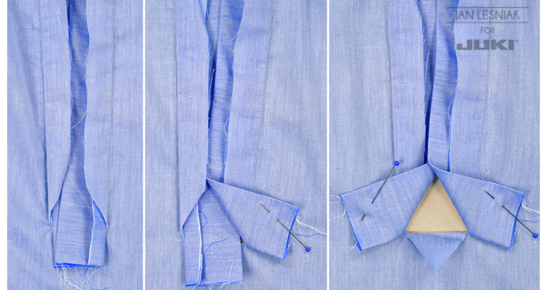 16
Now press a left and a right part of a binding with a iron so that they overlap in the middle; slide lower ends to the inside, under a triangle; first 3 pictures below show an outer side, another 3 pictures show an inside a sweatshirt with a binding pressed and slided inside; if a binding gathers at the edges of a lower part, you must slightly deepen a "Y" cut; if a left and a right side of a binding is too wide, you must move a seam fastening a binding to a sweatshirt towards the sides – that will widen a rectangle and narrows a binding; then you must also deepen a "Y" cut so that it ends just by the end of a new seam. 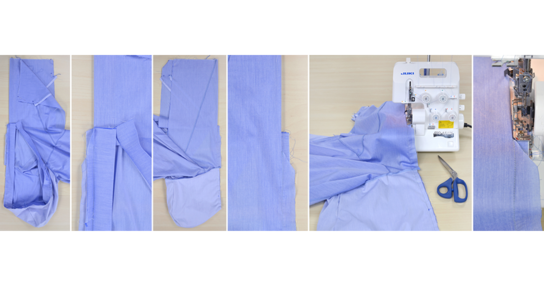 17
Now fold a front of a sweatshirt along a seam fastening a binding; a binding allowances and "Y" cuts should protrude beyond the folded edge; using an overlock machine, cut down an unnecessary allowance. 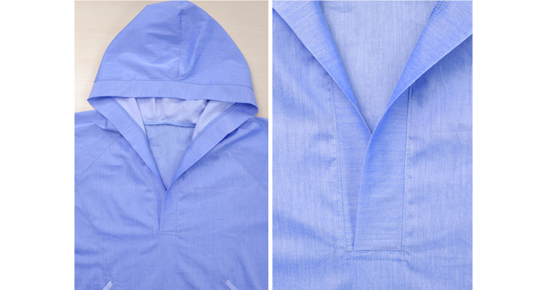 18
Sew a binding around on a right side, near a seam; sew precisely and closely particularly at a bottom edge so as to firmly fix a triangle folded to the inside; after sewing, cut off a triangle and ends of a binding using an overlock machine; fold a sweatshirt so that a front and a rear overlap and touch on right sides; sew sleeves and sides of a sweatshirt; do a seam under an armhole in a shape of a small arc and cut it off using an overlock machine so that an allowance is not too big. 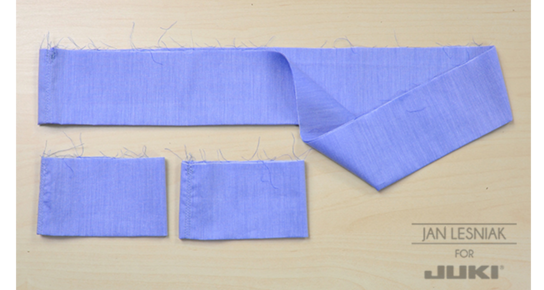 19
Now prepare cuffs; fold rectangles in half and sew their shorter edges; at a lower part of a seam, leave seamless opening for a rubber; press allowances with an iron on sides and sew them in length, together with a top so that they do not protrude from holes on a right side; then press cuffs with an iron in half, lengthwise. 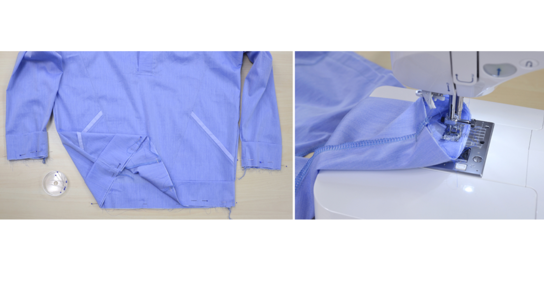 20
Sew cuffs to sleeves and to a lower edge; turn up a sweatshirt on a right side; slide cuffs on a sleeve so that a layer with an opening in a seam is on top; fasten unhemmed edges of a sleeve and a cuff; turn up a sweatshirt inside out and sew a cuff around; when sewing, a presser foot must be inside a cuff; do the same with a bottom of a sweatshirt. Press cuffs with an iron downward; using a safety pin, slide a rubber through an opening in a seam; pull its ends outside and sew them flat; sew the ends to the inside of cuffs. 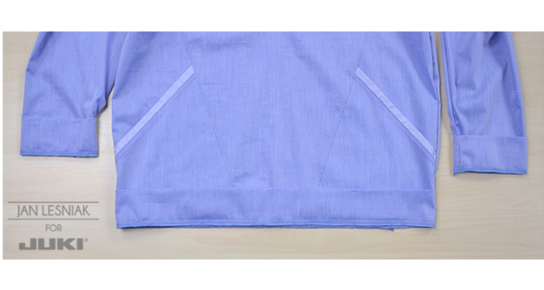 21
Press cuffs with an iron downward; using a safety pin, slide a rubber through an opening in a seam; pull its ends outside and sew them flat; sew the ends to the inside of cuffs. 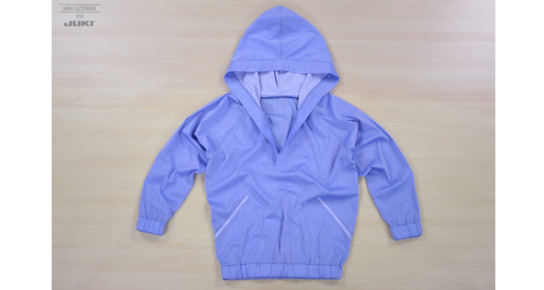 22
A sweatshirt is ready! You can additionally sew holes on a binding and sew on buttons.